← more from
Komos Jazz
Get fresh music recommendations delivered to your inbox every Friday.
We've updated our Terms of Use. You can review the changes here. 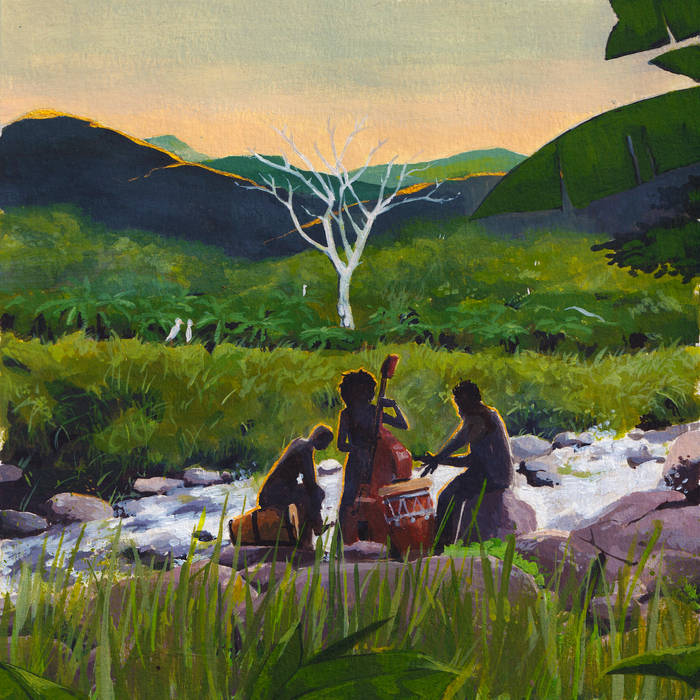 On her debut album, ‘Mare Undarum’, Sélène Saint-Aimé poetically transcribed the influence of the moon on her music, here, on this second recording, she transmutes her Caribbean cultural heritage.

In Antillean lands, the POTOMITAN, central pillar of Haitian voodoo temples, also designates the mother who supports the equilibrium of an entire family. This title stood out as an obvious choice for Sélène, after many months spent in Martinique during the pandemic.

Long conversations with her paternal grandmother retracing the history of their family, life, childhood memories and the strength of Caribbean women all 'infused' the writing and recording of this record.

The album plays out symbolically around the title track and it also acts as an analogy, interpreted by a trio, featuring the tanbouyé masters Sonny Troupé (Ka drums, Guadeloupe) and Boris Reine-Adélaïde (Bèlè drums, Martinique), who joined the team on their previous release. The interaction between the double bass, Sélène’s voice and these drums lies at the heart of the album.

Arawak Uhuru (freedom in Swahili), the first track, is a grand bèlè
with three beats to the bar that honours the many Amerindian populations present in Martinique since the 1st century, at least. Arawak does not designate an ethnic group in the strictest sense, but more a linguistic family.

Irving Acao, still on the tenor sax, also takes part in this vocal trance based around the traditional theme of Martinican Béliya, fleshing it out with Cuban sounds and rhythms.

Trumpeter Hermon Méhari, who forms a brass section with Irving on the majority of the tracks, brings his own rendition of ‘The Bird’ by Charlie Parker, who was, like him, originally from Kansas City.

The other cover on the album is an arrangement by Sélène of a theme from the Pelléas et Mélisande orchestral suite by Jean Sibelius. It places Mathias Lévy’s violin and Guillaume Latil’s cello at the forefront, in a version for a string trio and vocals. This track resembles a conversation with what lies beyond, and it is dedicated to Sélène’s maternal grandmother, as she was born exactly a hundred years ago.

Though she continues to sing in her own language all through the tracks, her first song in English, ‘White Birds, Silver Tree’ rounds off the record. Sélène wrote it in her uncle’s banana grove where cattle egrets come to nest. We can see them depicted on the sleeve painted by Lossapardo, near a dead tree with silver hues that graces a river’s edge, somewhere in the North of Martinique.

Without any repetition and (almost) without a score, the recording session played out organically, with Sélène dictating her melodies to the band on a piano which was in the room. Rhythms were sung then reproduced on the drums for a recording where the collective sound was captured live.

Far from a stiff reworking or a pan-Caribbean fusion, POTOMITAN, drinks from the spiritual and musical source irrigating afro-descendant culture, and invents a new folklore, vivified by improvisation.

Recorded and mixed in September 2021 by Félix Rémy at Studio Pigalle, Paris.
Mastered by Frank Merritt at The Carvery, London
Artwork painting by Lossapardo

Bandcamp Daily  your guide to the world of Bandcamp

sndtrak stops by with an Album of the Day Feature of his most recent release, FLIPS V1: Triple Lindy